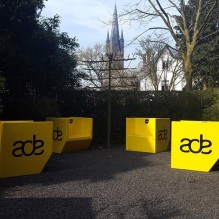 Bringing an array of their finest friends with them for the showcase evening on 19th October, Third Party will be joined by the likes of groove maestro Kryder (special guest), Corey James, Pete K, and Matt Nash (fresh from his recent ‘Release’ hit ‘Home’), with more acts still to be announced.

Made up of Jonnie Macaire and Harry Bass, Third Party are best known for their incredible live productions, and euphoric tracks, including most recent studio album ‘HOPE’; which spawning several huge and iconic anthems, including ‘Live Forever’, ‘Everyday of My Life’, and Martin Garrix collaboration ‘Lions In The Wild’ (27 million Spotify streams).

The ADE event sees the pair return to Amsterdam, having hosted a huge ‘Release Records’ party during ADE 2017, when the duo performed at The Box. Release Records have since hosted several showcase evenings worldwide, at venues such as London’s iconic Ministry of Sound club, with ADE 2018 seeing the pair take to NOVA for an intimate show with their fanatical fan-base.

Bringing their sold-out LIIIVE show to Liverpool Olympia earlier this year, Third Party showcased their dynamic diversity, using synths, drum machines and sample pads for the first time, clad with a special stage design bearing the image of their famous logo, made up of three horizontal lines.

With the pair also using the design during a very special set at Ultra Korea 2018, few acts in the electronic dance music scene right now can quite command the same level of respect and attention as Third Party, with the duo set to touch down at NOVA on Friday 19th October for an evening of unrivalled euphoria with the Release Records family.