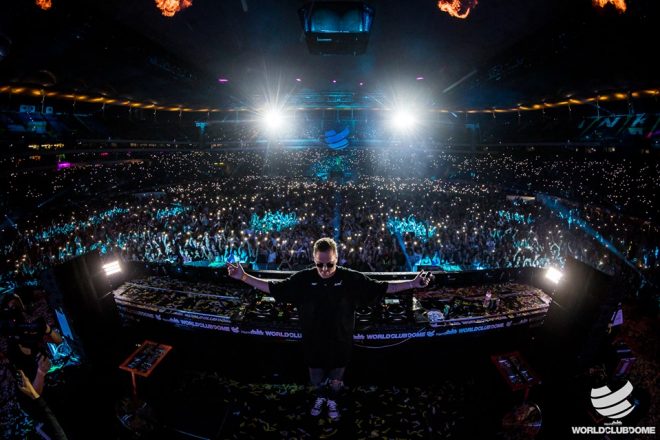 2019 has been a ground-breaking year for leading events brand BigCityBeats and they are set to end the year on a literal and ‘vertical’ high with their latest venture – BigCityBeats WORLDCLUB DOME Snow Edition. No stranger to putting on shows in some of the world’s most unbelievable venues, on 7th December they will build a club in the Swiss Alps at an altitude of 3,571 meters, in Switzerland’s most popular destination, the Jungfraujoch. Located at the highest point of Europe, WORLD CLUB DOME will treat clubbers to one of the most spectacular viewing platforms in the world.

The legendary BigCityBeats ICE Club Train by the Deutsche Bahn will chauffeur guests from Düsseldorf to Interlaken via Düsseldorf – Frankfurt am Main – Mannheim – Karlsruhe – Freiburg before pulling into to its final destination, Jungfraujoch, for what will be one of the most breath-taking venues in the world.
Bernd Breiter has always strived for bigger and better. After successfully orchestrating the first DJ set from space, Bernd has without a doubt achieved the unimaginable, always pursuing his goals and making his visions a reality.

When the Frankfurt Native wondered “Why not build a BigCityBeats WORLD CLUB DOME on a mountain on the ‘roof’ of Europe?”  It was obviously not going to be long  before his visions were put into motion.

On 7th December 2019, BigCityBeats WORLD CLUB DOME will celebrate its ‘highest’ earthly edition in the Jungfraujoch (Top of Europe) in the Bernese Alps. The highest railway station in Europe, which attracts around a million tourists every year, will be converted into a club for 100 guests. The observation deck will become an open-air dancefloor, the glass building turning into a two-story indoor club with spectacular performances from superstar hit maker Alle Farben, BigCityBeats resident DJ Le Shuuk, future rising techno star Mausio, Swiss Progressive House star EDX, Germany’s very own MOGUAI and boasting over 6 million Facebook followers – Korea’s #1 DJ – DJ Soda.

Deutsche Bahn – Germany’s leading railway company – has already transported hundreds of World Clubbers and DJs all over Germany to the main WORLD CLUB DOME event in Frankfurt. This winter they are preparing to take their partnership to the next level, as they gear up to transport revellers to a whole new clubbing experience.

The highly-anticipated event will play host to just 100 clubbers, with existing Winter Edition 2020 Ticket holders entered into a draw to be in with a chance of winning a place at the unique clubbing experience.
And that’s not all! The BigCityBeats Club Kitchen will be taking over the top of the Jungfraujoch for a brand new culinary and musical experience. Following the recent announcement that Michelin star chef Frank Rosin and German rap sensations Sido and Luciano will be opening a new restaurant franchise – Sakadem BBQ – the three figureheads are set to premiere their concept at the WCD Snow Edition, as they engage in a cooking battle that is sure to bring some extra heat to the mountains!

About BigCityBeats
The big city beats of the weekend. For 15 years, the Frankfurt event agency has brought pure club euphoria to the metropolises of the world, from the largest football stadiums and arenas to intimate club settings. Live entertainment at the highest level, hosting the world’s most successful DJs and acts from across the electronic music scene. Spanning Europe, Asia, America and beyond, from the Mediterranean Sea to the Swiss Alps, not to mention parties in weightlessness and live from space, BigCityBeats is the frontrunner when it comes to truly Global Entertainment.

WORLD CLUB DOME create the “biggest club in the world” for three days at a time. Taking place in Frankfurt in summer and Düsseldorf in winter. In Seoul, Korea and from 2020 in Malta as well as China, Russia and Dubai in the near future.

Music, entertainment, gourmet dining, fashion, science, technology and every single club genre are all united under the umbrella brand of the internationally successful and acclaimed event. WORLD CLUB DOME captures that unparalleled weekend feeling in unprecedented form, in cooperation with the European Space Agency ESA and Deutsche Bahn. The first DJ set from space from the ISS to earth. Mind-blowing stage shows with one of the biggest laser shows in Europe. Flights into weightlessness, with clubbers and celebrities. An all-time visitor record in 2019 with 180,000 guests over three days in Frankfurt. The list goes on and shows no signs of slowing down as WORLD CLUB DOME continues to dominate at an unstoppable rate.

In cooperation with the European Space Agency ESA and Deutsche Bahn, whether it’s the first DJ set from Space from the ISS to earth, a party at the highest point on earth, on planes, trains and cruise ships or flights into weightlessness with clubbers and celebrities – the list of jaw-dropping events goes on. With no signs of slowing down, BigCityBeats continues to dominate at an unstoppable rate.