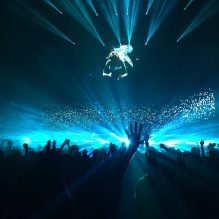 Flow Festival, taking place in Helsinki on 14th-16th August, announces the first act for the 2020 edition as world renowned Bon Iver. An American indie-folk sensation that draws from a wide range of musical genres, Justin Vernon is one of the Flow audience’s most requested artists, who last performed in Helsinki at 2012’s Flow Festival.

Bon Iver was born when its founder and frontman Justin Vernon ran away from heartache by retreating to a cabin in Wisconsin to write songs. Bon Iver’s debut album For Emma, Forever Ago came out in 2007, first self-released and later officially re-released in 2008 by Jagjaguwar. It was immediately clear that Justin Vernon was set to be one of his generation’s most talented songwriters. Both critics and audiences praised Bon Iver’s distinctive sound and Vernon’s memorable falsetto, with the debut album now widely considered one of the 21st century’s finest albums.

The band’s eponymous second album, released in 2012, and 22, A Million, released in 2016, were equally successful and highly regarded, with the former winning a Grammy award in 2012 for Best Alternative Album. After taking a few years off from recording, the band released an eagerly anticipated new album i,i in August 2019, to five-star reviews in publications all over the world, from NME to Helsingin Sanomat. Justin Vernon has called it their most mature and coherent album to date. The new album features contributions from James Blake, Brad and Phil Cook, Aaron and Bryce Dessner, Bruce Hornsby and Moses Sumney among others.

Flow Festival will once again host almost 150 performers across the festival weekend. The festival’s program is a comprehensive look at a wide spectrum of culture, from pop music to experimental art. The extensive music and art programs, high quality curated restaurant selection, enchanting festival site and large-scale sustainability program have ensured Flow Festival a position as one of Europe’s most interesting and acclaimed festivals. Flow Festival 2020 will be held in Suvilahti the 14th-16th August with 3-day Early Bird tickets are on sale now.

Price applicable for the time being.

Ticket price includes the service fee. Other ticket types will be on sale in 2020.