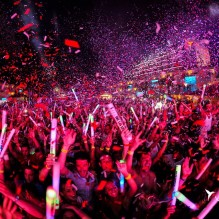 Award-winning nightclubs Ushuaïa Ibiza & Hï Ibiza are celebrating the return of clubbing and nightlife to Ibiza, following record-breaking attendance of their official opening party ‘Better Together’. The 24-hour musical marathon, which took place across both clubs from Saturday 30th April to Sunday 1st May, sold out in record time and welcomed back a world-class line up of global musical talent and thousands of clubbers to the dancefloors of Ushuaïa & Hï Ibiza.

Yann Pissenem, CEO & founder of The Night League, the team behind venues including Ushuaïa and Hï Ibiza, said:

“We’ve waited a long time to welcome our worldwide music family back to the dancefloors of both Ushuaïa & Hï Ibiza, so it was an amazing feeling to open the doors for Summer 2022. With both clubs at full capacity, the atmosphere was incredible! Ibiza has woken up to the sound of electronic music again and everything points to this year being one of the busiest summers on record. Not only did our Opening Party sell out in record time but we are also seeing a huge demand for tickets throughout the entire summer, which is a really positive signal for tourism on the island”.

The earliest ever season Opening Party for both clubs saw performances by many of the biggest names in electronic music, including Adam Beyer, Black Coffee, Charlotte de Witte, Kölsch, Layla Benitez, Paco Osuna, Paul Kalkbrenner and The Martinez Brothers. Alongside incredible DJ sets and live performances, music fans witnessed the spectacle of custom-built production that has made the multi-award-winning Ushuaïa Ibiza and Hï Ibiza world-famous.

Clubbing is well and truly back in Ibiza and the stage is set for an incredible summer of music at Hï Ibiza and Ushuaïa!

Hardwell
14 August
+ many more to be announced